"Some Viewpoints haven't been yet viewed by many"

A viewpoint high above McLeodganj town providing tremendous views of Kangra valley is still not known to many. The 500 meters trek beginning from Galu devi temple (Base camp for Triund) is worth a visit. The starting point is just opposite to car parking at Galu devi temple & Rest-a-while-cafe.

After walking for about 300 meters the trail bifurcates to right with a series of concrete steps that lead to temple with no roof. This is a point where someone has put a 'No Parking' sign board out of no where. I still wonder why would someone even think of parking his vehicle high above where it takes over a hundred stairs to reach. A good place to chuckle anyways.
Further from this point another 100 meters of steep climb can take you to a small flat grassland where you may be surprised to find hundreds of Tibetan Prayer flags.
This spot is surely to offer the best views to Kangra valley and some plains of Punjab on one side and Passes of Dhauladhar on the other (such as Bhima-ghasturi pass & Gaj pass and some views of kareri and Naddi villages). I am surely going to plan a sunset trip to this point someday.


A good place to take nap on a cold sunny day.

Another viewpoint on the opposite hill to Galu devi temple (adjacent to Triund trail) is called as Best viewpoint. There is a Durga temple perched on the top of a rock high on that hill. The route isn't well marked and a a very steep trail is difficult to locate in the dense forest, the only way is to climb whatever trail we find, as most of the trail is along natural curves of hill covered with leaves. The area being prone to wildlife, I was advised to trek in a good sunlight not in dark evenings and also play some loud music in my phone to generate some disturbance which keeps the animals away. It was the midway of my trek when I found 'Huge Cairn' , (it is a pile of stones one on another and mark the trail), I was happy to see it because that meant I was on the right path, (thanks to GPS logs) .
I was about to keep another foot forward when I saw a 2 feet long snake accompanying me, she (I wonder she must be a female :p) came out the leaves scattered on trail and went ahead of me. Also I could see dark clouds rising and still had an ascent of one hour followed by a desend of 1.5 hours. All this and my conscience was enough to make me run back to base. That was the fastest one Km I had ever done.
Finding snakes aren't a big thing when you  are already venturing in Bear's territory but it was the first time on a solo trek I had experienced such a close company to a brown large headed crawling beast. Thanks to my hiking pole that allowed me to descend safely at a speed when the trail was quite invisible.

For GPS logs of these treks Visit. and more information can be gathered from Tinku, the owner of Rest-a-while-cafe.
Labels: HIMACHAL
Reactions: 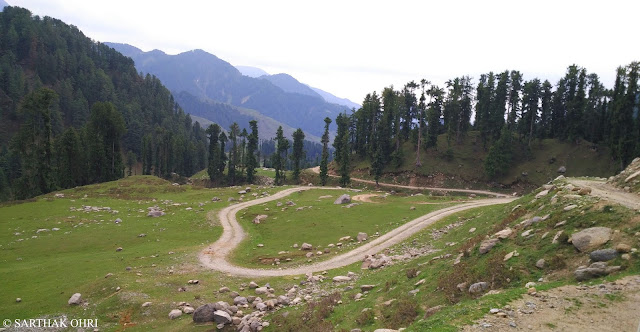 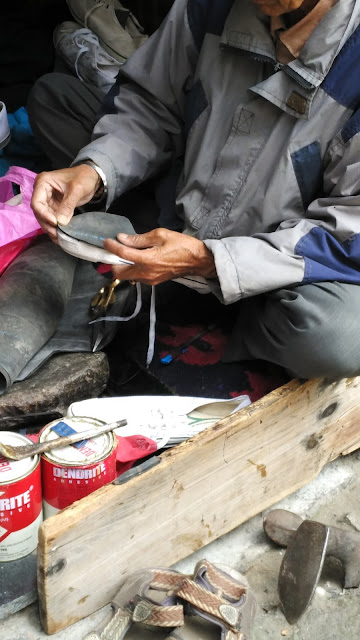